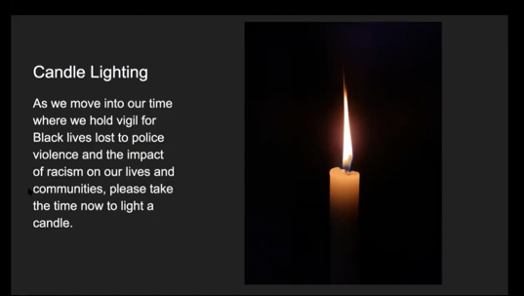 I thought rather than writing a series of articles on systemic racism, I would lift up voices from our presbytery as I hear them, especially as Los Ranchos congregations are discerning constructive ways to embody the Great Ends of the Church, and specifically the “promotion of social righteousness; and the exhibition of the Kingdom of Heaven to the world.”

I would also invite you to read with the Christian Formation and Discipleship Team the book White Fragility by Robin Diangelo It conveys in a scholarly way the dynamics of systemic racism and the actions white people can take to interrupt racism’s progress in our society.

Back to the Vigil 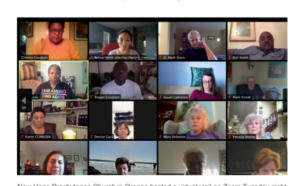 The following introduction was offered by the vigil’s co-host, the Rev. Chineta Goodjoin.

We are going to begin by giving them the opportunity to respond first. After that, we will open the conversation for those who do not identify as Black or African American.

Now, while the structure and/or the speaker’s words may seem uncomfortable, I am asking that those who are present with us tonight sit in the tension, sit in the discomfort, sit with the uncomfortable, and resist the urge to defend because, ultimately, we are about creating change and we are about love. And people need to be heard.

So, the first question is directed to the Black community, because now is your time. The question is, “What has been the personal impact—physical, psychological, spiritual—of racism and racial violence in your life?” 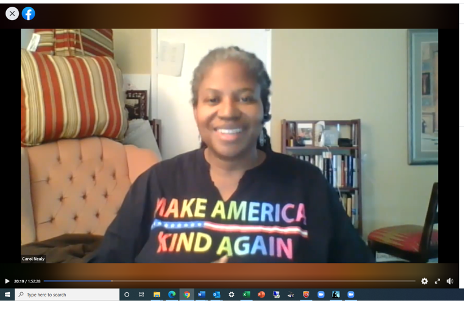 “Racism is an integral part of my life, so much to the extent that I rarely question it. I graduated from top-tier universities with superb grades. I have traveled the world and have had a successful career in corporate America.

So, for that, honestly, racism is so ingrained in my mental psyche that I had to think about what I would do differently if racism were not an integral part of my everyday life.

For example, our work emails have a personal icon, and most of my non-African-looking colleagues have a picture of themselves on their icon. I don’t. I want the recipient of my email to read my work product before they know that I’m African American.

Another example is that I know how to be non-threatening, whether we are talking about how I respond to an officer during my so-often-experienced ‘random airport security checks,’ or if I’m pulled over while driving.

I dress up when I travel for pleasure. I chuckle at the privilege when I see someone wearing flip-flops and shorts when they travel through the airport. I don’t think twice about calling the taxi on behalf of my brother so that he is not rejected. I don’t allow my 5-year-old son to wear his hoodie on his head, even though he really likes the way it feels.

And, if you think about it, the African American Black community is not a monolith. The community is diverse in its experiences, families, education, religions, and perspective. Yet, I feel responsible for my entire race.

When a newscaster reports that someone does something terrible, I pray that they are not black. I tip more at restaurants so that blacks will receive better service. I do these things, and more, without thought.

So, when I think about what has been ‘the physical, psychological, and spiritual impact of racism in my life,’ I would not be who I am today without racism. ‘Living while Black’ is real, and it is tiring.”

I realize that this is a tough place to end this installment, but if we have any hope of interrupting structural racism in our society (and I believe we do, because God is with us), we will need to practice what Pastor Goodjoin has invited us to do. Let us sit in the tension, in the discomfort, because, ultimately, we are about creating change and we are about love.

Integral to this journey is lament, which involves deep sorrow, but through confession, repentance, and reparation, I believe we shall arrive at a place of abiding peace, because we will have more justice in the world than when we first began.