From Merry-Go-Rounds to Flywheels: How Los Ranchos is Going from “Good to Great” 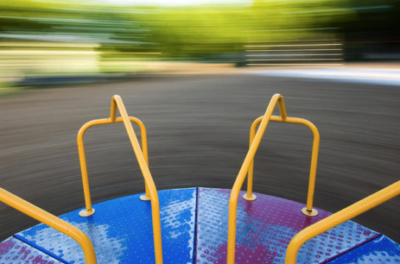 Back in the day, almost every park had a spinning platform called a “merry-go-round.” The object was to get the platform spinning as fast as you could by running alongside it while holding a bar that separated its slots. Then, in one courageous move, you would jump onto the platform and feel the forces of physics take over. If you were really bold, you might attempt one of your favorite moves, like holding on one-handed or hanging on by just your legs. Those were the days!

For the sake of lowering the incidence of childhood head trauma, however, merry-go-rounds have largely disappeared. With them, too, has disappeared a practical way for children to learn physics. Although I’m not a science wiz, I found the merry-go-round to be a great place to learn concepts like inertia, centrifugal force, momentum, and, after falling a few times, gravity.

But more important than the physics lessons, were the social lessons I learned. Of course, there was the lesson of “teamwork.” The more friends you had pushing, the faster it would spin and the more fun you would have. It also took “synchronization;” one had to time when you jumped on and off the platform so as not to step on anyone, as well as to give each other rests when someone became too tired to push anymore. After all, a spinning merry-go-round is a fun merry-go-round!

I wouldn’t have guessed then that the lesson of the merry-go-round would translate all these years later into one of the most popular metaphors for organizational excellence. In his bestselling book Good to Great, business guru Jim Collins writes about “the flywheel effect,” which is basically a grown up version of the merry-go-round.

In his book, the flywheel isn’t a park toy, but an enormous disk that weighs upward of 5,000 pounds. To get it moving requires any number of people to push in the same direction, not once or three times but hundreds of times.

The inertia that has to be overcome is so heavy it takes multiple pushes by a whole bunch of people to get it going. Then, at some point, Collins describes, “its own heavy weight begins working for you. You’re pushing no harder than during the first rotation, but … each turn of the flywheel builds upon the work done earlier, compounding your investment of effort. A thousand times faster, then ten thousand, then a hundred thousand. The huge disk flies forward with almost unstoppable momentum.”

In other words, the flywheel takes on a life of its own!

When I think about where we are as a presbytery, it is hard for me not to think of Collin’s flywheel. We have this powerful vision statement about who we are becoming—“a community of flourishing congregations that joyfully participate in God’s redemptive work through Jesus Christ in the world.” And we have clear strategies for how we will achieve it (“Revised Mission Plan”), namely, to excel in the art of neighboring, the art of starting new churches, and the art of living joyfully together in a diverse community (“Strategies in Plain Language”). 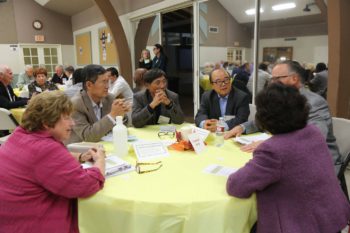 From where I sit, I can see a multitude of hands pushing in the same direction, aligning resources to get the flywheel moving. Congregational leaders are reaching out to each other to learn ways of becoming better neighbors. Our Cyclical Search Team is seeking an Associate Director to spearhead our church-starting efforts. And our Presbytery Gathering Team is designing our quarterly gatherings based on the themes of our vision and strategies. It’s not one big push, it’s a thousand little pushes in the same direction.

That’s how you get the flywheel turning. And that’s how organizations like ours go from “good to great.” Some pushes may be bigger than others, but any single heave reflects only a small fraction of the entire cumulative effect upon the flywheel.

I realize that businesses are not presbyteries, but I think Collin’s flywheel translates seamlessly to the work we’re doing right now. Indeed, I could find fewer words more descriptive of our season than when he writes, “Good to great comes about by a cumulative process—step by step, action by action, decision by decision, turn by turn of the flywheel—that adds up to sustained and spectacular results.”

I’m still a little peeved that merry-go-rounds have disappeared in playgrounds, but I’m learning that being part of a great presbytery is way more fun!