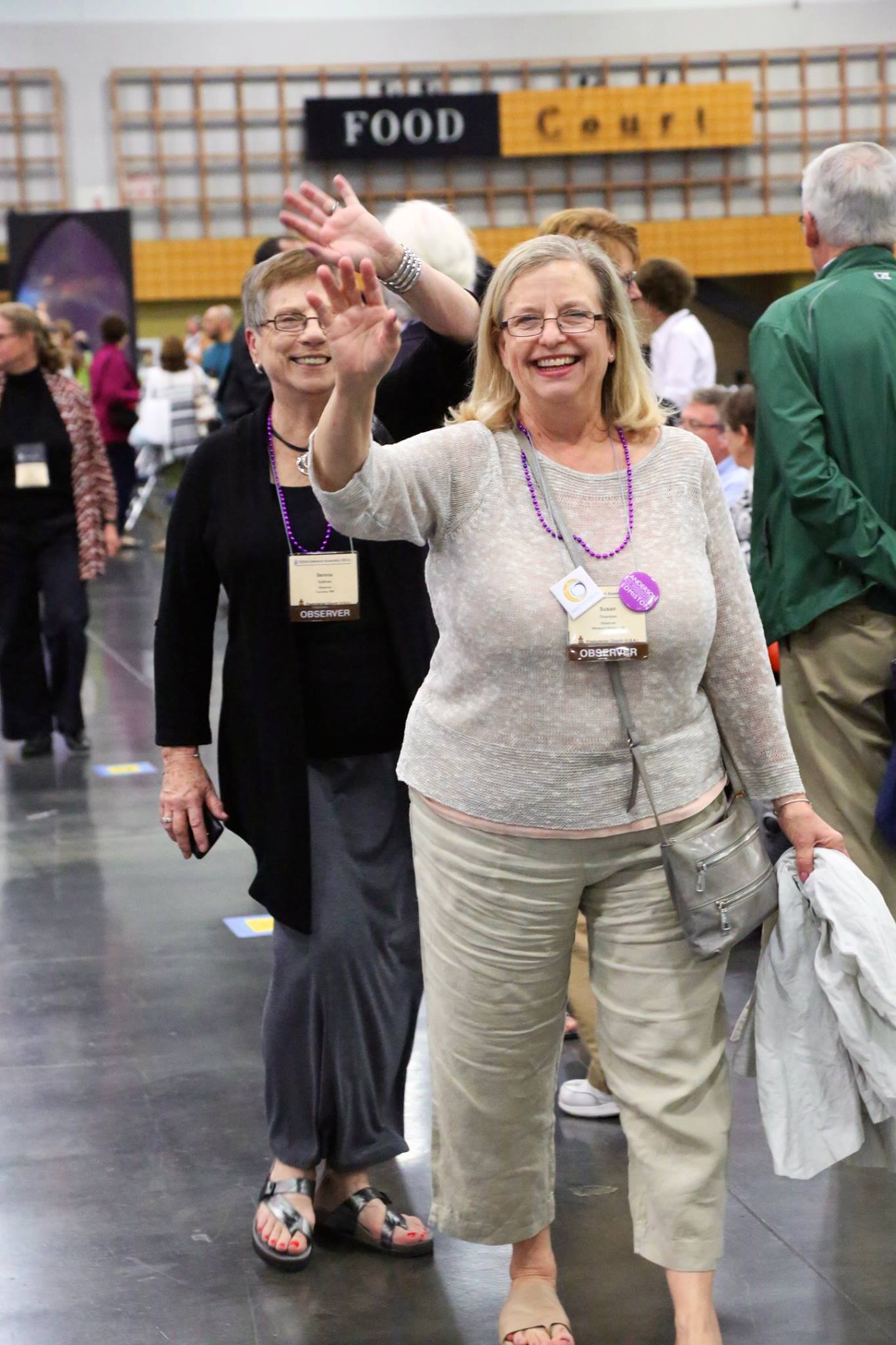 The 222nd General Assembly of the PC(USA) was a glorious celebration of the wider church. It was also historical. The Assembly approved the Confession of Belhar  to be included in our Book of Confessions, ending years of conversation on the church’s role in reconciliation, race relations, and peacemaking. There was hardly a dry eye in the convention center when it passed.

Also historical, was the first election of women co-moderators, one of them a 37-year old African American (see below). And, of course, there was the widely celebrated election of J. Herbert Nelson, the first African American to be elected to the office of Stated Clerk in our denomination’s history. One got the sense that our denomination is finally starting to look like the society in which we serve, and benefiting from the rich gifting of all our sisters and brothers.

Los Ranchos can be proud of the four commissioners and one Youth Advisory Delegate we commissioned to do the work of the wider church. They worked 13-hour days considering such topics of refugee care, fossil fuel use, and opening the communion table as a place of welcome not merely for the baptized but for all who would taste and see that the Lord is good.

Boiling the work of the Assembly down to just a few items is a challenge, but I’m going to try. Here’s my list of the Top 10 Things that Happened at the 222nd General Assembly: 10) The most talked-about business in advance of the Assembly was the “Foothills Overtures,” a collection of constitutional amendments and rules changes that would have radically altered the way the Assembly does its business. I’ve written about these overtures — named for the Foothills Presbytery of South Carolina, from which they originated — in an earlier blog post. The effect of these overtures would have been — by restricting how often certain topics could come up and by adding supermajority voting requirements — to eviscerate the Assembly’s ability to do almost anything related to social justice. In the end, the Assembly carefully considered these overtures in a special committee, then resoundingly voted them all down.

9) In the early twentieth century, Presbyterians could be found at the forefront of the Fundamentalist movement, advancing a literalist interpretation of scripture. We are very far from that place a century later, interpreting scripture with the full range of literary and historical tools available. In two separate actions, the Assembly stated definitively that science and faith are not enemies, that evolution — rather than a literal reading of the Genesis creation stories — is a reasonable explanation of how God created the universe, and that Christian disciples should not shrink from using the full range of their God-given intellectual abilities to advance scientific inquiry.

8) Could the “sex wars” really be over? Generally, the atmosphere at this Assembly was far less contentious than some of recent memory. This is largely due to the changes that took place at the last two Assemblies, allowing freedom for GLBTQ believers to assume ordained office, and a similar freedom for pastors and sessions wishing to offer same-sex marriage ceremonies where permitted by civil law. There was an overture to return to the “one man and one woman” language once present in the Directory for Worship’s section on marriage. This was resoundingly defeated by a more than a 4-to-1 margin. Another overture, coming from the opposite end of the theological spectrum, called on the church to formally apologize to GLBTQ Christians who have been marginalized by past church teachings. The Assembly declined to use the emotionally-loaded “a”-word, speaking instead of “regret.” This was in order to provide gracious space for those who continue to be dissent from the church’s tolerant stance on same-sex marriage, honoring their freedom of conscience.

7) After contentious debate, the Assembly rejected a call for aggressive divestment of the church’s stock-market holdings in two hundred corporations that produce fossil fuels. Instead, the Assembly opted for a less-confrontational strategy of engaging these companies in dialogue through stockholder resolutions. 6) The Assembly approved an amended report, “Israel-Palestine: For Human Values in the Absence of a Just Peace.” This supports the two-state solution to that intractable conflict, taking particular note of the imbalance of suffering between the Israelis and the Palestinians. The Assembly refrained from moving beyond phased divestment from Hewlett-Packard (the position of the last Assembly) to an outright boycott, continuing to work with that corporation to encourage them to do less to support the Israeli occupation of Palestinian areas.

5) The last two Assemblies have pondered the future of synods, opting for consolidation of our existing synods into even larger regional bodies — but not specifying exactly how this was going to take place. By a large majority, the Assembly rescinded that mandate. Commissioners approved the appointment of a high-level “2020 Vision Team” that will explore our governance structures at every level and make recommendations for change. Leader of Vision and Mission for the Presbytery of Los Ranchos, Tom Cramer, speaks at the Committee overseeing the Syrian Refugee issue.

4) In a surprise move, the Assembly resoundingly approved an overture calling for a return to “minister of the word and sacrament” as the prevailing title for the order of ministry that has been called, since the adoption of our present Form of Government, “teaching elder.” Both terms will still be used, but “minister” will now be primary, as it has been through every other era of the church’s history. I have written about this issue previously in an article in the Presbyterian Outlook. In a related development, the wordy title, “ruling elder commissioned to limited pastoral service” (commonly called “commissioned ruling elder”) will now be called simply “commissioned pastor.”

3) New faces in leadership: for the first time ever, there is no Anglo male face among the senior leadership of the church. The Assembly elected the Revs. T. Denise Anderson and Jan Edmiston (of National Capital and Chicago presbyteries, respectively) as its first-ever co-moderators. It also elected the Rev. J. Herbert Nelson (formerly director of the church’s Washington Office) as Stated Clerk. Tony De La Rosa continues as interim director of the Presbyterian Mission Agency. Look for great things, in particular, from J. Herbert Nelson. He’s a powerful orator in the tradition of Martin Luther King, Jr. and a change-agent. While he has never been a stated clerk before at any level, he promises to be a quick study.

2) The Assembly approved a draft of a new Directory for Worship that will now go out to the presbyteries for approval. The changes have to do mostly with making the Directory for Worship more concise and usable, although it does offer new flexibility to welcome unbaptized inquirers to the Lord’s Table, as long as the invitation to be baptized is made clear to them. 1) And now, the number-one thing this Assembly did was to complete the process of adding the Belhar Confession as the twelfth confessional document contained in the Book of Confessions. While this was pretty much a foregone conclusion — since three-fourths of the presbyteries have already given their required assent — still, it is of great historic significance. After the positive vote, theologian Allan Boesak of South Africa, one of the authors of the Belhar Confession during the apartheid era, addressed the Assembly. He ended his remarks by saying, “We may not know what tomorrow may bring, but I know this: tonight, we have overcome. I know this: because of Jesus, we shall overcome. I know this: whatever may come in our world, we shall overcome.” In a moving moment, the Assembly responded by spontaneously breaking into song, singing — what else? —“We Shall Overcome.”

All photos by Erin Dunigan